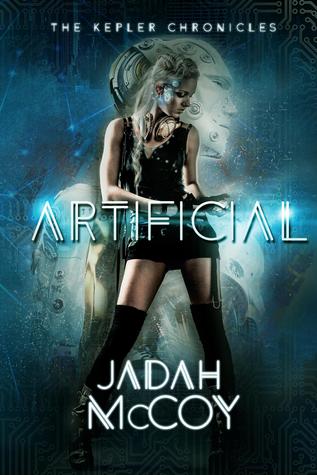 She struggles to feel human.

In 2256, the only remnants of civilization on Earth’s first colonized planet, Kepler, are the plant-covered buildings and the nocturnal, genetically spliced bug-people nesting within them: the Cull. During the day, Syl leaves her home in the sewers beneath Elite City to scavenge for food, but at night the Cull come looking for a meal of their own. Syl thought gene splicing died with the Android War a century ago. She thought the bugs could be exterminated, Elite city rebuilt, and the population replenished. She’s wrong.

Whoever engineered the Cull isn’t done playing God. Syl is abducted and tortured in horrific experiments which result in her own DNA being spliced, slowly turning her into one of the bugs. Now she must find a cure and stop the person responsible before every remaining man, woman, and child on Kepler is transformed into the abomination they fear.

He struggles not to.

For Bastion, being an android in the sex industry isn’t so bad. Clubbing beneath the streets of New Elite by day and seducing the rich by night isn’t an altogether undesirable occupation. But every day a new android cadaver appears in the slum gutters, and each caved in metal skull and heap of mangled wires whittles away at him.

Glitches—androids with empathy—are being murdered, their models discontinued and strung up as a warning. Show emotion, you die. Good thing Bastion can keep a secret, or he would be the next body lining the street.

He can almost live with hiding his emotions. That is, until a girl shows up in the slums—a human girl, who claims she was an experiment. And in New Elite, being a human is even worse than being a Glitch. Now Bastion must help the girl escape before he becomes victim to his too-human emotions, one way or another.

Author Bio:
Jadah currently lives in Nashville, TN and works in law. When not babysitting attorneys, she can be found juicing her brain for creative ideas or fantasizing about her next trip out of the country (or about Tom Hiddleston as Loki - it’s always a toss up when she fantasizes).

She grew up in rural Arkansas, yet can still write good and sometimes even wears shoes! She did date her first cousin for a while but they decided against marriage for the sake of the gene pool.

Her true loves are elephants, cursing, and sangria - in that order. If you find an elephant that curses like a sailor whilst drinking sangria, you’re dangerously close to becoming her next romantic victim - er, partner.

A house looms in front of me, quiet and ominous. It’s tucked away at the edge of the city, where the tree line gets thicker and more dangerous. It’s almost completely overrun with creep moss, the forest reclaiming the building after decades of disuse. It looks to be undisturbed, which means there might still be food there.

Eclipse season is coming soon, and the months beforehand are always a scramble to get more scouting parties out, pushing the boundaries of how late we return. There’s always a shortage of food, and if we run out during the eclipse, well… Whoever draws the short stick better gear up and pray their flashlight doesn’t attract anything other than Cull.

It couldn’t hurt to scout this one last building. Besides, Serge and Lucca won’t be heading back for a few more minutes, and there’s too much adrenaline in my system to retreat back into the sewers just yet.
I glance up; the sky is orange. I’ll have to hurry.

Creep moss cascades from the door. I brush it aside and the thin tendrils disintegrate into puffs of powdery green. I cover my nose and mouth with a hand; the stuff can cause hallucinations if inhaled.

Inside, the building is mildewed and molded, the frame probably only held together by the moss and vines attached to it. Orange light shines through the stained windows, illuminating the dust motes in the air. The floor creaks as I pass through what looks to be a living room. A few feet away, something scurries in a small hole. Beady eyes peer out at me.

Past the living room is a tiny rectangular room that was once a kitchen. The one window in the room is shattered. Flowering limbs press through and cover every surface, sealing shut the cabinets lining the walls. I take my knife and jam it into the crack between the two cabinet doors, sawing all the way down until I can pry the limbs away with my blade. They drip red onto the counters below, and the liquid bubbles as it eats at the material.

I pull open the cabinet and… jackpot! Stacks of cans greet me on the other side. I reach for them and—
There’s a loud thud in the next room.

My hand freezes in the air, my grip tightening on the knife in my other hand. I step out of the kitchen and farther down the hall. The room across from the kitchen is dark and quiet, partially lit by a stray beam of evening sunlight.

“Hello?” My voice sounds too loud in the silence.

I return to the cabinet, shoving the cans of food into my bag. It was probably nothing, just some animal seeking shelter or being nosy. That doesn’t stop me from cleaning the place out and getting the hell out of there as fast as possible.

Sprinting wouldn’t get me out of the kitchen fast enough. Maybe I inhaled some of those damn creep moss spores on accident.

When I leave the house, I glance back one last time. For a moment I think I see a face in the dirty window, white and smiling, and then it’s gone. A shiver trails down my spine.

Posted by Caroline Vaught at 7:23 PM