It's my greatest honor to reveal the cover for the third book in the Air Awakens series, Earth's End. But, before, I thought I would share a little about the first two books, Air Awakens and Fire Falling.

A library apprentice, a sorcerer prince, and an unbreakable magic bond...

The Solaris Empire is one conquest away from uniting the continent, and the rare elemental magic sleeping in seventeen-year-old library apprentice Vhalla Yarl could shift the tides of war.

Vhalla has always been taught to fear the Tower of Sorcerers, a mysterious magic society, and has been happy in her quiet world of books. But after she unknowingly saves the life of one of the most powerful sorcerers of them all—the Crown Prince Aldrik—she finds herself enticed into his world. Now she must decide her future: Embrace her sorcery and leave the life she’s known, or eradicate her magic and remain as she’s always been. And with powerful forces lurking in the shadows, Vhalla’s indecision could cost her more than she ever imagined.

Soldier… Sorcerer… Savior… Who is Vhalla Yarl?Vhalla Yarl marches to war as property of the Solaris Empire. The Emperor counts on her to bring victory, the Senate counts on her death, and the only thing Vhalla can count on is the fight of her life. As she grapples with the ghosts of her past, new challenges in the present threaten to shatter the remnants of her fragile sanity. Will she maintain her humanity? Or will she truly become the Empire’s monster?

WITHOUT FURTHER ADO, I REVEAL THE BEAUTIFUL COVER OF EARTH'S END. 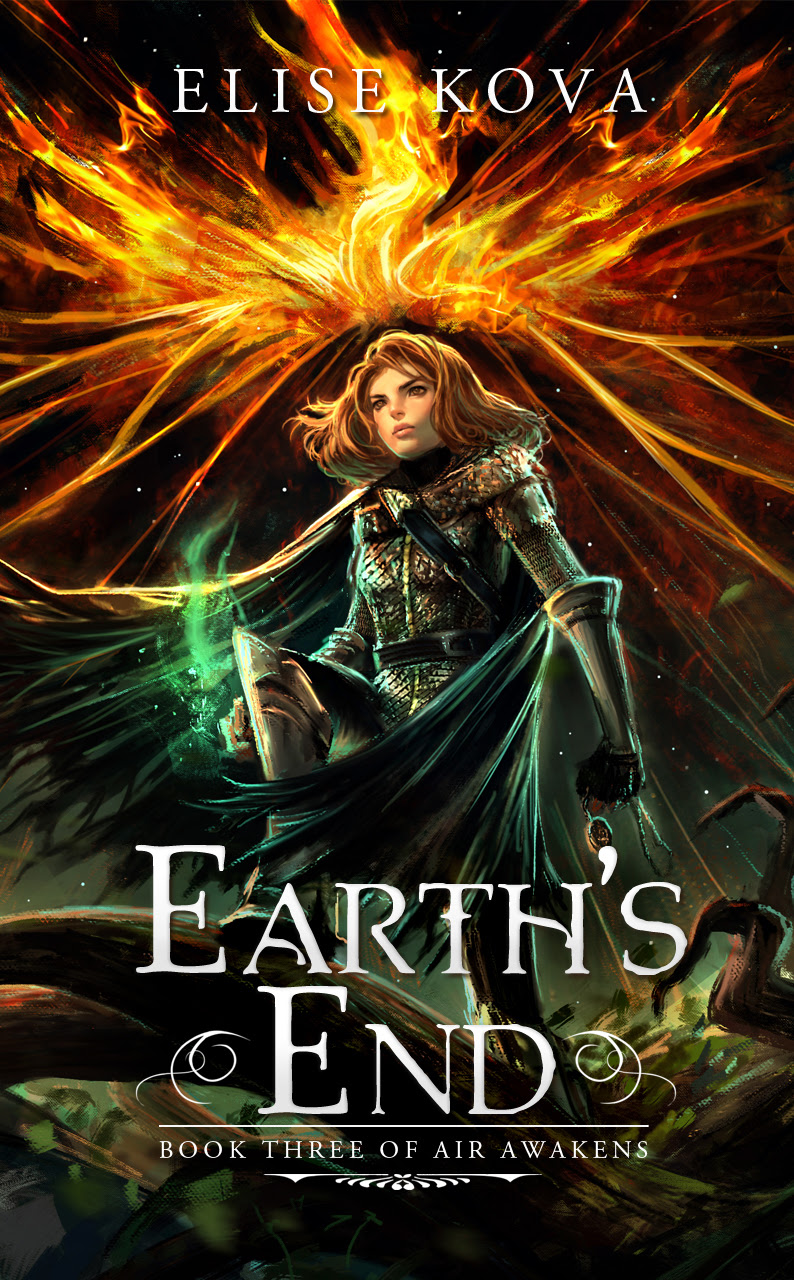 Just as stunning as the first two covers, no? The cover art is by the lovely Merilliza Chan ( zwxART )

There both so close, yet so far away!

A woman awoken in air, a soldier forged by fire, a weapon risen from blood.

Vhalla Yarl has made it to the warfront in the North. Forged by blood and fire, she has steeled her heart for the final battle of the Solaris Empire’s conquest. The choices before Vhalla are no longer servitude or freedom, they are servitude or death. The stakes have never been higher as the Emperor maintains his iron grip on her fate, holding everything Vhalla still has left to lose in the balance.

You can find Elise Kova over on her website (www.elisekova.com) or other social medias listed below

Elise Kova has been kind enough to raffle off:

Posted by Caroline Vaught at 5:11 PM